Moe, Larry and Curly make their way from the silver screen to the video screen.

Nyuk-Nyuk-Nyuk! Up to three players can become Stooges in this game based on the antics of the three slap-happy funnymen. The Stooges' fiancees are kidnapped by a mad scientist, and the stooges must use their In each round, your selected Stooge must collect three keys in each round, then go through an exit to advance to the next level.

To find those keys, you must have a mallet with you. There are two mallets in the room. Use the mallets to destroy the furniture and find those keys. There are also some other goodies, such as a star and an award that closely resembles an Oscar, that will give you bonus points.

This game, however, couldn't be complete without the enemies: The upper crust, cops, and other Stooges (natch!). To disable them temporarily, push the button when not carrying a mallet to slap that person. Hitting them with a mallet knocks them out for good!

In stage 7, the Stooges confront the mad scientist. The scientist is standing by the exit, and as soon as all three keys are collected, you have ten seconds to go out the exit and catch the mad scientist. If you are successful, you continue on to level 8. At level 14, you get to rescue your first fiancee. The Stooges get to free the other two at Levels 28 and 42. 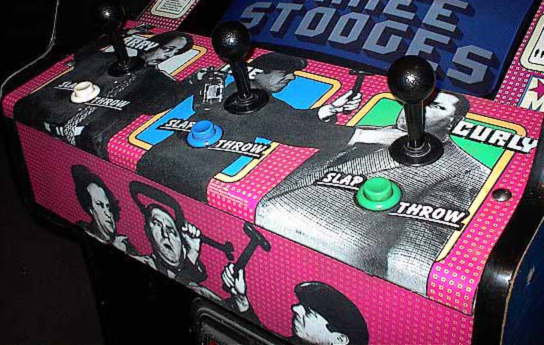 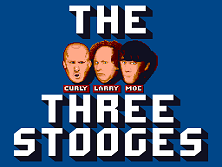 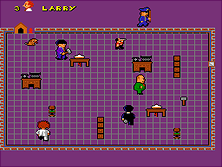 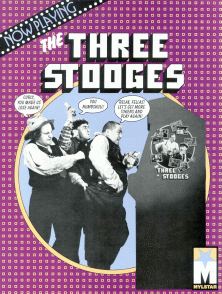 by gatorman_925. Comment: "Woo-woo-woo! This happens to be a very witty game based on the antics of the Three Stooges. Most of the Stooges' humor and hilarity are transferred to this game. If you played it in the arcades, or should you play it on MAME, you should enjoy seeing the Stooges slap, splat, and bash their way toward their brides. (Nyuk-nyuk-nyuk!)" 2001-12-03 18:19:21Z

Search the following for Three Stooges