As Bub and Bob, you try to capture enemies in bubbles and pop them to complete all 100 levels and rescue your girlfriends.

Lots of power-ups and hidden features.

The first game of the Bubble Bobble series. Bub and Bob are changed into bubble dragons and must save their girlfriends from Hyper Drunk.

This game, along with Ms. Pac Man, Bust-a-Move, and Galaga, is one of the steadiest money makers in arcades. Some games are hot for a while and die, but Bubble Bobble seems like it will live for many more years.

The naming and order of these games leads to a lot of confusion: 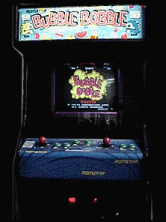 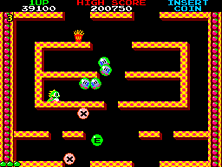 Search the following for Bubble Bobble