It's 2am. You're in the subway. The wrong place to be unless you're looking for trouble. They've got sticks, chains and your girlfriend. It's up to you to fight your way through the thug infested city to save her.

This game is really what started the 2D fighting genre. Renegade is kind of like Double Dragon 0. You are a martial arts expert and you have to fight your way through the city to save your girlfriend (sound familiar DD fans?) There are 4 stages to fight through.

Stage 1: Fight thugs in a subway. Thugs and stick fighters in a eerie subway station. Kill them quickly by throwing them off the subway platform. Then mix it up with their boss.

Stage 2: Fight bikers in a seaside parking lot. First you have to dodge bikers who are trying to run you down. Jump kick them off their bikes. Then face the ones on foot. Kill them quickly by grabbing them and tossing them into the sea. Then tangle with their boss.

Stage 3: Fight prostitutes in a dark alley. Come on! No fair. You have to beat up girls. But these girls are armed and dangerous. Some have spiked purses to swing and some have long leather whips. There's no quick way to kill these whores. To defeat superwhore, run away from her and when she starts to chase you, back kick. Repeat.

Stage 4: Fight gangsters in an alley. These guys have long sharp knives. You are killed by just one blow so watch out. One way to do them in is with fast punches and moving around a lot. The boss has a gun and is very quick.

Each stage has 5 or 6 enemies to beat up with the boss character standing in the background watching the action. When there are only 3 enemies left, the boss joins in. You not only have to fight the thugs, you have to beat the timer.

Renegade has voice and bright colors and doesn't suffer from game slowdowns when the action gets intense, compared to Double Dragon. However, you can't pick up weapons or play simultaneously with a friend, which probably kept Renegade from being the popular game it otherwise may have been. 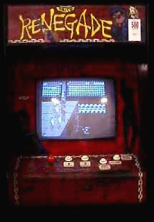 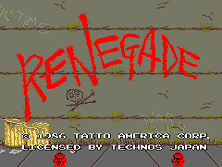 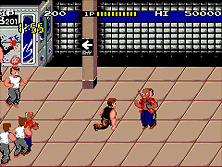 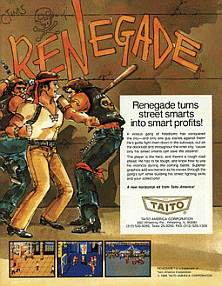 Search the following for Renegade