A decent platformer to look at and has excellent novelty and collectable value but isn't the most fun to play.

This game was released on both of Capcom's CPS1 and CPS2 hardware. Both are very rare and now hard to find anyware. The game wasnt really a hit in the US so not many units were made. The gameplay basicly consisted of the player choosing one of 3 heroes. You take your hero and fight against various bosses from the Mega Man nintendo and SNES games. You could choose to go against the bosses from Mega Man 1 and 2, 3 and 4, 5 and 6, or 7. All you did in the game was fight bosses. Graphics were good for the time, but the game was primitive and the bosses patterns were easy. 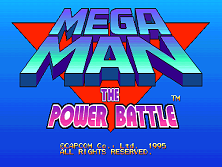 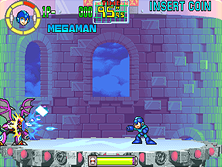 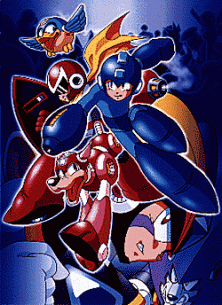 by Yu_Gi_Oh_KingofGames. Comment: "I've played this game at the arcade and all I have to say is that this games is the most fun I've had in a long time with a megaman game. It's a lot more fun than any other Megaman games (excluding Megaman X games) and let you choose from Megaman, Protoman, and Bassman. If you see this game put in a quarter (or token) and have a blast." 2001-11-04 20:57:15Z

Search the following for Megaman: The Power Battle