The game begins with your mission: To defend the planets. You must then choose which planet to go to: There are a total of five planets; you will travel to each of them, destroy the enemy invaders, and blow up their base. After leaving the planet, you must fight your way through enemy ships to the next planet. Once you have defeated the enemy on these five planets, you are presented with an artificial planet. (I can't help but call it the Death Star...) On this planet, you will be presented with the toughest challenge in the game: Many enemies to fight, the bosses from the previous planets, and one final boss. (I've never defeated him!) If you make it through the game, you are awarded 500,000 points, some music, and everyone celebrates your victory. 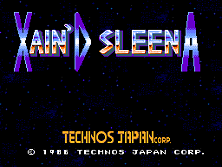 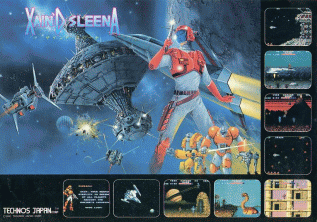 by teal. Comment: "Xain is one of my favourite games of all time. Each world has clever terrain obstacles and a native boss of some sort (like a sea monster), and an enemy boss. After clearing each world, you get to take on the enemy's fleet of ships with your own ship, fun! I wish they'd port this game to the Game Boy Advance, it'd be perfect for the GBA. I also wouldn't mind seeing a few more worlds like an ice planet, for instance. The final level, the death star like artificial planet, is very hard, I have never been able to finish it, but it's a lot of fun to try." 2005-02-08 17:31:23Z

by andeh. Comment: "i can't believe it! i've just found this game after 20 years of searching! i played it on holiday in malta as a child and it ruined my life, turning me into a video gaming geek until i liked girls! for anyone who remembers this and wants more of the same check turrican, it's possibly just as awesome. satfisfied at last." 2005-03-29 13:44:11Z

by victoryman. Comment: "At the time of Xain'd Sleena's creation, the arcade video hardware wasn't that great. Limited number of sprites on screen. The music programmers had to strugle to come up with something good using cheezy blips and ring-tone sounds. Nevertheless, this game remains a true arcade classic to me! Even with jerks, slow-downs, and occational word or two at the machine for not doing what I (as a kid) wanted - I loved playing it! The main theme is great, sound tracks go very well with each level, and you had a &quot;choice&quot; of which planet you wanted to charge at." 2005-04-21 02:07:14Z