Astro Blaster is the unofficial sequel to Astro Fighter. As such it is a great improvement. The game features 29 different attack waves, spread over 6 sectors. Between sectors, the player negotiates a meteor shower, and then docks with a mothership. One of the first games to speak to the player. This would say such things as "Fuel status marginal" and "Laser temperature critical". In addition to the conventional left-right-fire buttons, there was also a Warp button. The Warp could be used once in a sector, and it slowed down the action to almost a standstill, during which the voice would count down from 10 until normal speed was resumed. 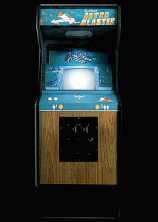 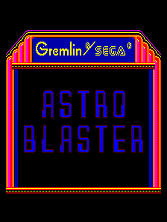 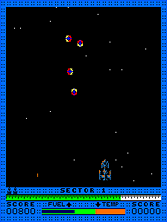 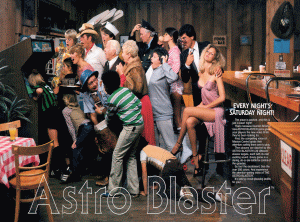 by Reinen. Comment: "I`ve only ever seen this game in one place - and man, they had the volume on it pumped up so loud the entire cabinet shook, you`d walk away with a piercing ringing in your ears after ten minutes of gameplay. `Pilots needed for sector wars - Play Astro Blaster!` You wanna see the cabinet rumble (literally) when the asteroid (?) field drops down on you. Superb game!" 2003-02-18 09:21:38Z

by settingsons. Comment: "When I played this in the arcades in my early teens, it was by far the best shoot 'em up around. As previously mentioned the cabinet used to shake and rumble with the roar of the ships engine. It really sent the pulse racing. I play this with Mame now, and still get the same excitement from the game. Totally underrated - a lost gem." 2005-03-19 11:57:05Z

Search the following for Astro Blaster