Sequel is Stargate/Defender II; had two spin-offs- Revenge of Defender (for home computers) and Defender 2000 (for Atari Jaguar). 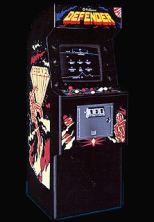 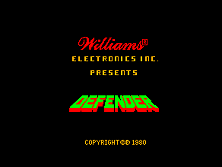 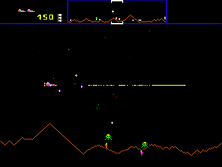 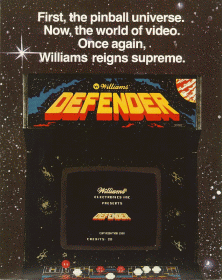 by garth. Comment: "I use to play this game for hours on one quarter.not like todays games. what a thrill to get my first million on this game. And to have your name up in lights for everyone to see.my hands still shake today from hammmering on the fire button all day. nothing like the old arcade.defender fan for forever GWC." 2000-12-16 23:52:09Z

by jabbasoft. Comment: "you've got 5 minutes to kill, so you play defender! simple and addictive, will get your blood racing in the later levels when you somehow manage to dodge all the bad guys, or when your last humanoid get whipped away." 2002-06-10 17:58:02Z

by DefenderBoy. Comment: "This game was and still is the best. The amazing control panel layout, the amazing sounds, the amazing character set, the amazing game theory and the amazing scroll screen.. I thank the William's Crew for their efforts on this one. And reaching 1 Million is a blast. HS: 2.5M" 2003-08-05 07:56:03Z

by bomber555. Comment: "I'd never experienced anything like it before and have never since - especially after the sole unit we had in all of Nairobi, Kenya (yup, way out here in Africa) succumbed to wear and tear around 1988 after several yrs. I spent ages contemplating traveling 300 miles to Mombasa on our eastern coast, where the next one was rumored to be, but it wasn’t possible then. The effect of Defender on an indigenous African teenager way back in 1981 could easily be underestimated. For me, Defender stands way out as the Greatest computer game of all time. The initials of the Greats on its All Time Greatest – MRM, PBJ, SAM, KID (WHEREVER U GUYS ARE) - remain embedded in my memory." 2005-05-18 06:42:25Z

Search the following for Defender