Duel with discs in futuristic arena.

Leap from disc to disc in 3D environment - fire discs at Sark (your opponent) and avoid or deflect his discs, chasers, super-chasers, and energy pellets.

Very complex, but very intuitive controls. Joystick featured a trigger button (fire a disc) and thumb button (deflector). Knob controlled the aim of your disc, including vertical aim. On later levels, pulling knob up/down allows player disc to be aimed at different angles or to be bounced off the ceiling.

Speech on Discs of Tron.

Only the environmental speaks, and then only "sort of."

There are two versions of the upright, one the "psuedo-environemntal" which has the city background, and a standard upright which does not. Neither version has speech unless there is a speech board installed.

When upright cabinets shipped from the factory, they removed the speech from the program, perhaps to save money. This can be verified in the test screens for the sounds. The environmental has entries for speech, the upright does not.

After the upright was released, they decided to release a ROM upgrade and a satellite board, to add speech to the uprights. If your machine got an upgrade board, it will speak, otherwise no. 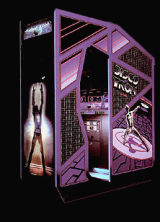 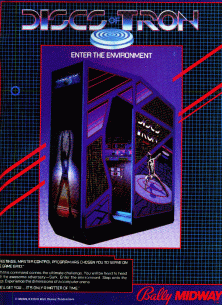 Search the following for Discs of Tron