Mario's first appearance in a video game, he was first introduced as jumpman and was a carpenter not a plumber as he is known today. This was Nintendo's first game by Miamoto, he later created all Mario games on nes, snes and n64, also Mario has become the most popular character in video games. In the 90's Donkey kong was brought back to star in his own game on the Super Nintendo. There were only two sequals to DK they were DK JR and Donkey Kong 3 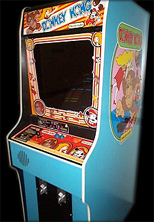 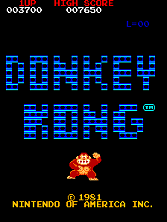 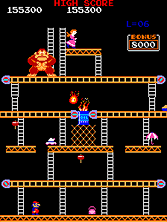 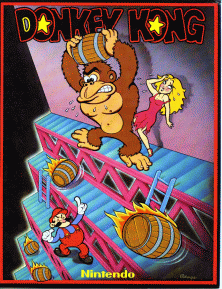 by kk. Comment: "How high can you get? Of course, the fact that Nintendo built an empire on the carpenter character nonwithstanding, this was a pretty decent game at the time." 2000-07-26 09:02:04Z

by dsig. Comment: "Hard not to rate this game 5-stars. It did so many things to further develop the video gaming industry. It was one of the first climbing games, one of the first games to have multiple levels, it turned Nintendo into a household name and in effect helped the home gaming industry to be as successful as it is now. Last but not least, it's just plain fun! Too bad the modern games don't look back at how important the characteristics of this game have been." 2000-07-27 17:27:49Z

by bahamut. Comment: "Great game, always loved it when I was a kid and still do. Just wondering, does anyone know where I can get a replacement monitor for it, cause mine is starting to wear down, if you can help, email me at Bowden@wctc.net Thank you!" 2002-11-27 17:11:21Z

by madpembo. Comment: "had so much fun played every night got told i played to much by mum &amp; dad what did they no ha ha can any body tell me where to go on computer to play this game would love to play it again my email is pembo@bushinternet.com thanks " 2003-06-11 14:41:54Z

by BlackRage. Comment: "Just got my Firt arcade machine three days ago. Found it by chance while buying stuff for work, it was Donkey Kong. It needed some work, but after a day of looking on the net, and trail and error, I got it working. Been playing it now every waking momment for the last 48 hours. Anyone know how to find more???" 2005-05-15 20:39:09Z

by jabutler02. Comment: "I have always loved this game. I was driving down the road today and saw something sitting behind the supermarket next to the dumpster.... Guess what it was Donkey Kong. After an hour or so i saw something i think on this website checked that and it was the prob. Now i have a perfect working version of DK ..... YEAH !Guess today was my lucky day." 2006-07-23 01:03:18Z

Search the following for Donkey Kong