Much copied game - frogs hit by trucks quite common - had to cross river via logs - why can't the frog swim???

The 1997 remake/update by Hasbro gave a second incredibly popular life to the franchise. It also engendered controversy; much like Tetris and other "hot properties", it was discovered that the company claiming to own Frogger didn't. Still unsure of the details, but Sega lost their claim, and Konami ended up becoming sole owner of the Frogger trademark and copyrights. (Does anyone know if perhaps Konami purchased Gremlin, or used to be Gremlin?)

Home versions are by a plethora of publishers; the original licence from Sega was divided between ROM and magnetic media- Parker Bros. got the ROM rights, Sierra the magnetic. This created the odd situation of 2 publishers doing the same game for the same system.

The book "Hackers" by Steven Levy details the development of the Atari 8-bit computer version for Sierra On-Line.

Developed by Konami, released by Sega.

Trivia: An episode of Seinfeld had a parody of the game- an overhead shot of a man attempting to wheel a Frogger arcade cabinet across a busy street. The scene ended with the cabinet being smashed apart by a truck- quite traumatic to watch. 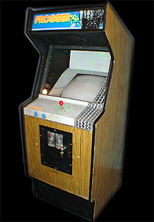 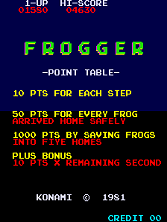 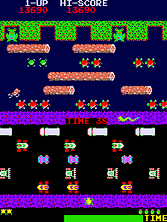 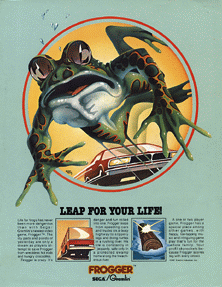 by thelord04. Comment: "Frogger is the greatest arcade game of all time. Up until I was 7 my uncle owned an arcade and he had this game. It is a classic! If only my parents didn't force me to sell my Atari and the Atari version. The arcade version was great though. " 2003-10-13 11:59:31Z

Search the following for Frogger