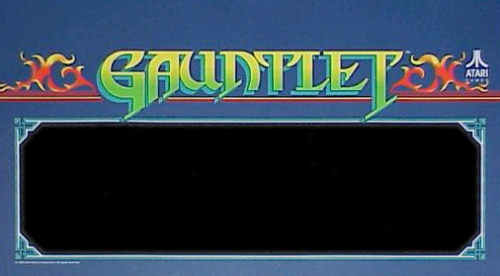 Multiplayer (up to 4) exploration/shooting game with RPG elements.

When Gauntlet was introduced, it was a major technological achievement in arcade game design. (So much so, that this game has been on at least two nation-wide museum tours.) In the mid-1980's, the popularity of pen-and-paper role-playing games such as Dungeons & Dragons was at its height. Still hot from the success of Marble Madness and Paperboy, Atari Games created a game to capitalize on the current craze. In fact, what they DID create was a game that had an ambience that extended much further than the confines of the cabinet, and made them a LOT of money.

Gauntlet's premise is simple, as it usually is in better game designs. One to four players choose a character and explore the depths of a multi-level dungeon; destroy monsters by shooting, fighting or using magic potions; and collect power-ups to last longer.

Uncommon for most games of the time, a credit buys the player ONE life with a health gauge. This health is lost from damage inflicted by monsters and also as a function of time, so even if you avoid everything you will eventually face certain death. A player increases the amount of health he has by eating the food placed on the various levels. Some food may be destroyed by an ill-placed shot. Players can also collect keys to open doors and magic potions to use as smart bombs when the odds are overwhelming.

Each character has his own attributes: Thor the Warrior is a monster-bashing machine, but not gifted in magic nor very fast; Thyra the Valkyrie is well-equipped for close-quarter fighting, but her long-range destructive abilities leave a lot to be desired; Merlin the Wizard has excellent magic and range attacks, but has no physical prowess to speak of; and Questor the Elf is extremely nimble, but not even close to powerful. These attributes (magic, strength, speed, etc) can be increased by collecting "hidden" potions which appear every 3 or 4 levels past level 8, the first advanced level.

Occasionally, bonus levels called "Treasure Rooms" give players a chance to increase their score, and possibly an attribute, by collecting treasure or a "hidden" potion. Certain levels may wrap around themselves or cause players' shots to hurt or temporarily stun other players.

One of the most acclaimed features of Gauntlet was the extensive speech used throughout the game. The speech was not only used for effect ("Elf has been eating all the food lately"), but also for instruction in the early levels ("Save potions for later use"). At the time, games with that level of synthesized speech were unheard of. The sheer amount of enemies (and in some cases, the monster generators made that amount seem endless) was another lauded feature. Last, but certainly not the least, was the fun factor of the game. Four people trying to coordinate their movements is anything but unentertaining, even today! 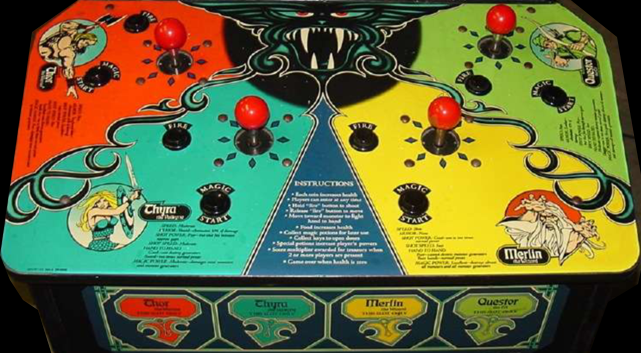 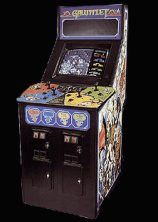 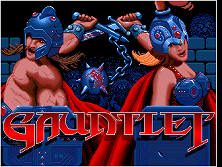 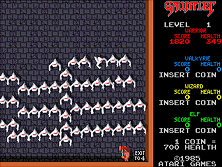 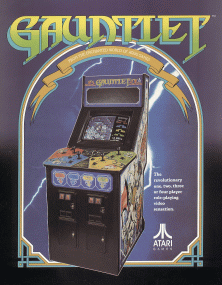 by Sonance. Comment: "Classic stuff. You could always bet that wherever you played it on holiday, there would be some local lad who knew the game inside out. He'd typically guide you round everywhere, helping you conserve your energy and get the most bang for your bucks." 2000-09-13 20:45:39Z

by firebird. Comment: "Do I have to rate it? Can't I just say it was a blast?! Having it 'chanting' through the entire bowling class (near the arcade, in college) was enough to drive any good student into the arcade afterwards. Fantastic team player game. "Don't shoot the food!" "Warrior is about to die!"" 2001-07-04 11:24:07Z

by marminZ80. Comment: "To play this game alone is IMO quite a disaster.. there's just no reasonable way to avoid or fight all those monsters, grunts, deaths, and other evil stuff. I found that somewhat frustrating and.. unfair! But graphics and especially sound were great. " 2003-04-20 17:15:35Z

by theoz69. Comment: "This game was fun to play and insanely addictive. My Friend was the MASTER of this game. He would frequently drop a quarter in this game and only quit playing - ON ONLY THE ONE QUARTER - 4 or 6 hours later when his contact lenses had become too dry. If laser eye surgery was around then he would probably still be playing. He got to a high of level 110 before quiting. Numerous times he had to BURN a potion in order to pick up a key since he could carry no more items." 2005-09-09 14:30:01Z

Search the following for Gauntlet