Jump around pyramid, changing the color of cube faces.

From Warren Davis: "Another programmer, Kan Yabumoto, had filled a screen with shaded hexagons which looked like cubes. I had the idea of creating a pyramid out of them, and dropping balls down. This was a programming exercise for myself to program randomness (the balls have exactly 2 choices of which way to go each time they hit a surface) and gravity. It was after I had this programmed that other people noticed it and we were encouraged to turn it into a game."

Ron Waxman came up with the idea of Q*Bert changing the color of the cubes. Q*Bert's name originated by the combination of cube and Hubert, but the Cube-Bert was changed to Q-Bert to make it more unique. The concept game was called Snots and Boogers and then @!#?@! (which many of the programmers and Gottlieb VPs said would be impossible to get anyone to say) before the final version was called just Q*Bert. Slick and Sam were a play on the phrase "spick and span" with Sam being named after co-worker Sam Russo. Rick Tighe came up with the idea of adding the pinball hardware which generated the very mechanical KA-CHUNK when Q*Bert falls off the pyramid.

Good results can be obtained by working your way down one end of the level at the start, moving across the bottom to the other side, catching a disk to the top, and then filling in the middle squares.

A big part of the game is waiting to see where creatures are going to jump. You need to make sure you always time a jump at the same time the creatures jump to you can always have a clear path to a new square.

After level 9, the levels repeat themselves.

Because the game was developed during the period when Columbia Pictures owned Gottlieb, the intellectual rights to Q*bert remained with Columbia, even after they divested themselves of Gottlieb's assets in 1984. The rights have been owned by Sony Pictures Entertainment since 1989. Q*bert appeared in Disney's Wreck-It Ralph franchise under license from Sony, and later appeared in the film, Pixels. 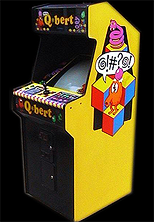 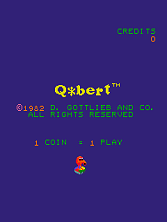 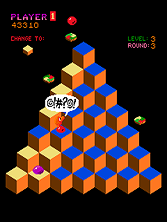 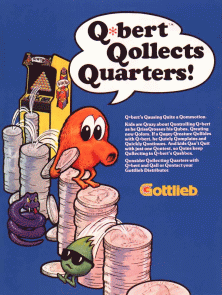 Search the following for Q*Bert