In this overhead view racing game, you navigate through scrolling maze levels, collecting flags as faster moving enemy cars try to chase you down. Since only part of the maze is visible, there is a handy radar screen off to the right that shows the position of your car, the location of the flags, and the positions of the enemy cars.

Each flag is worth 100 x the number of the flag. One of the ten flags along the way is designated special. Pick that one up, and all remaining flag points are doubled in value.

In addition to all this, you also have to keep your eye on the fuel gauge, which will run out if you take too long to complete a maze. Bonus points are awarded for fuel that remains after a level is complete.

Enemy cars can be stunned for a short time by puffing a smoke screen, but using the smoke gobbles up fuel.  There are also rocks to avoid and, if you can, use to your advantage to deflect the chasing cars. (Enemy cars do realistically run into each other, so expect some pileups.)

Every third round is a challenge round, and the enemy cars don’t give chase unless you use up all your fuel.

For such a simple game, Rally-X generates a surprising amount of excitement. The mazes are just complicated enough that you are never quite sure which turn to take, and because the positions of the flags are randomly generated each level, no two games are ever quite the same.

An odd feature: If you drive your car straight down at the oncoming enemy at the very beginning of any level, you’ll pass right through. Something having to do with the time-space continuum, no doubt. 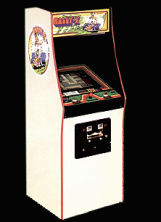 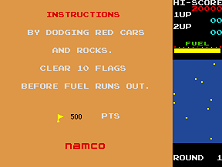 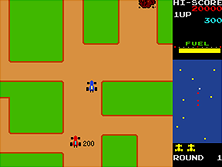 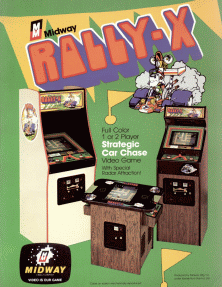 Search the following for Rally-X