The gameplay of Reactor is simple and unique. You are a diamond-shaped ship trapped in the core of a nuclear reactor. Your enemies are a bunch of subatomic particles: Photons, Positrons, Neutrinos, Nucleons, Pions, Leptons. All of the outer walls are death to touch. All you have to do is smash your atomic assailants into the walls without letting them return the favor. Sounds easy, right? Well, not quite. You see, as you spend time in the chamber, the core of the reactor is slowly heating up and expanding outwards, forcing you closer to the wall and giving you less room to maneuver in. The only way to cool off the core is to either destroy all of the particles in the wave (some have as many as 47 particles to smash), or to knock in an entire set of the control rods which line the sides of the walls by knocking particles into them.

Your ship is not entirely defenseless however. The 2.5" trackball gives you excellent maneuverability and precise control, which you will definitely need. Your ship can emit an unlimited energy field which kicks the enemies around more strongly than just using your ship (of course the opposite also applies!). And if all else fails, your ship carries a limited supply of decoys, which when dropped will cause the bad guys to completely ignore your ship in favor of the decoy, at least for a few seconds.

The solid core of the reactor does not directly help or hinder you. It functions more as an expanding inner wall than anything else. You may rest against it without taking any damage. However, after a certain number of waves have been cleared, the music starts up, the screen flashes, and the core changes into a whirling vortex! The vortex is definitely not your friend. If you get too close to it, you will be sucked right in and destroyed! And like its solid core counterpart, the vortex expands. 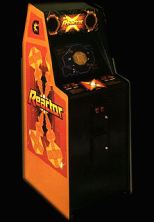 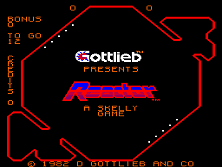 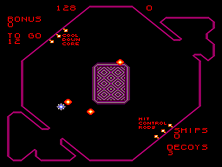 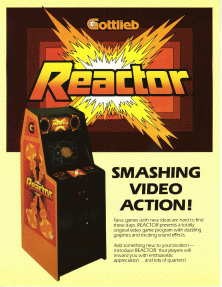 by Nefastis. Comment: "Very abstract and cool-looking. Lots of strange and clever game mechanics (eg. decoy as particle attractor). Fast and fun. I'd love to play this with a rollerball." 2000-07-28 10:50:34Z

by caveman. Comment: "This has got to be THE most underrated game of all time that is also essential to anyone's game collection. Great sound and music - thanks to David Theil - and one of the most original concepts to grace the arcades thanks to the genius of Tim Skelly. It's also one hell of a lightshow, and still easy on the eyes." 2004-11-27 18:41:22Z

Search the following for Reactor