A cooperative two-player game in which you and your teammate try to protect fuel pods from the enemy tanks.

An ingeniously designed vector graphics game in which you work in tandem with another player to try to prevent enemy tanks from stealing fuel pods located in the center of the screen. The enemy tanks can fire on you and you can fire back. You can also destroy the enemy by colliding into them with your tank, but this will temporarily remove you from the game. When one wave of tanks has been wiped out, a new faster and more difficult wave will appear.

The game ends when all of the fuel pods have been stolen.

This game can be played alone, but it is very challenging. With two players there is a terrific cooperative element to the game play. One player can guard the pods while the other shoots the enemy. 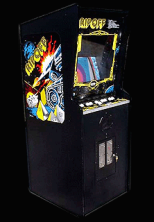 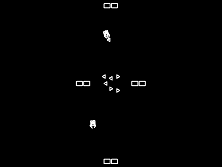 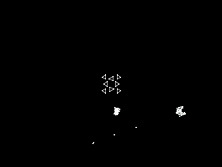 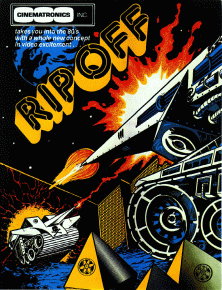 by WildKaarde. Comment: "One of the first two player games my wife and I played - and we both still like it 20 years later! It's much better two players than one - you have a much greater chance of saving your diamonds/triangles/pods than solo. On the higher levels, I'd regularly kamikaze the last opponent, just to relocate back to my starting point. It drives similarly to Asteroids, with real friction, so you do come to a stop. (no hyperspace button - sorry.) With a limited number of shots in play, I find it best to burst a few rounds out into one direction, rather than rapid fire and miss another shot. Your pods get carted off by the enemies, but if you hit them as they're getting away, your pod is saved (for the moment.) It usually becomes a primary target for the rest of the bad guys to go after. Very high levels wind up having the enemies move faster than your shots. Aim for the pods instead of the bad guys. Oh, game play speeds up as you lose more pods to the enemy.... The simplicity of the artwork and the tempo of the sound make it more than just a memorable game. MAME's sounds for this game are horrible. Sounds like it was taped on a used 8-track and funneled through a beer can." 2002-12-28 16:08:36Z

by ripoff. Comment: "I could not remember the name of this game, it seems to me that another version of this was also in the arcade in 1981? It had a name plate with fonts that made the name illegible, even with study, it also did not look like the pictured cabinet, the controls were like battlezone, and the screen was grayscale. The game play is a direct hit though... This was one of the very funnest of games that I experienced, especially since you could always start yellin for help from the other gamers in the arcade!! And 9 times out of 10 a bored gamer would plunk in a quarter and then the action would really heat up! There was nothin like it, and even though the game would always woop yer butt, it always got paid and usually had a short waiting line!! :) It brings back fond memories of spending way to much money on pepsi, cupcakes, and video games..." 2003-05-12 18:32:16Z

Search the following for Rip Off