Space - Fly over planet surface and destroy base

Although this game was manufactured by Stern in the US, it was released on the Konami compilation CD of arcade classics -- available for the Sony Playstation.

Described by magazines of the time as the "poor man's Defender." Several bootlegs exist. It was Licensed from Konami. Sequel was Super Cobra.

Many games, including several Stern releases were written or hacked to run on Scramble Boards. 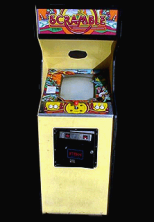 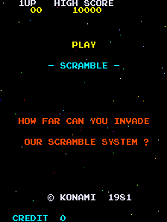 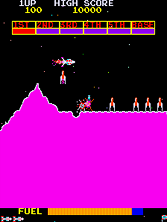 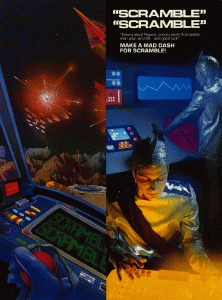 by steviewonder35. Comment: "My favourite arcade game of all-time. Couldn't get enough of this game back in the arcades/takeaway shops back at the beginning of the eighties. Couldn't believe my luck when MAME came along." 2003-08-30 01:14:28Z

by MINKYMONKEY. Comment: "This little game is a slice of nostalgia for me. Was one of my favourites as a nipper and things havent changed much now im somewhat older. A fast pached, excellent side scrolling space game with all the relish. You are in control of a &quot;Blake 7&quot; stlye craft and your aim is to wander across a bleak and ever changing landscape whilst blasting everything that moves. This machine ate money nearly as fast as defender due to the catch 22 situation. The catch is that whilst blasting everything that moves you need to make sure that you hit enough fuel tanks to remain alive! This game was pretty high tech stuff for its day and has stood the test of time. Playing it is a bit like watching the original star wars movie in as much as nobody, truely nobody is gonna tell me that anything after was ever so good ;)" 2005-08-06 13:59:17Z

Search the following for Scramble