2 player only - first vector graphics machine produced - take on an opponent in a duel around a star with variable gravity.

Button controls were Rotate Left, Rotate Right, Thrust, Fire and Hyperspace. Timed game usually set for 1:30 per quarter. Variable settings that the players could choose (in any combination) were speeds (of ships and/or missles), sun settings (normal, blackhole or invisible sun), gravity settings (total: ships stop when you left off thrust, no gravity and settings inbetween), screen settings such as closed universe, missle bounce, etc.) Of the two ships, one looked like the asteriod ship, the other like a starship enterprise (and octagon with two drives off the back).

A nice feature of this game is the ability to change the environmental settings on the fly and you could damage ships with partial hits. Debris trailed your vector ship with reduced firing, thrusting and control. Worst case senario, only you bridge remains, your trusters are gone! You could fire limitedly but if you were playing with a black hole, you would get sucked in eventually (not to mention any shot you or your opponent fired would also spin around the black hole)! Speed settings were crazy too. If you set the speed to the highest settings and you fired while moving forward, you would catch up to your own shot and blast yourself! 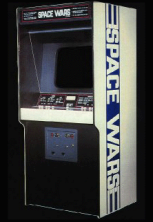 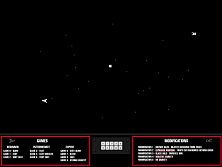 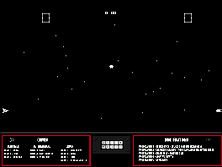 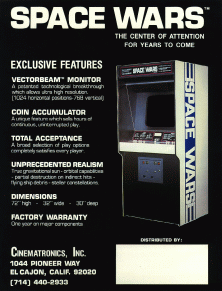 Search the following for Space Wars