Features possibly the most controls on one game - difficult to learn - featured many hidden secrets and tactics. Minor classic.

This was the first game produced for Williams by Eugene Jarvis' company Vid Kidz.

The title refers to the teleportation "gates" present in the game- this title was dropped by Williams/Midway for reasons that have not been made clear. There have been claims that it infringed upon a trademark held by a board game manufacturer.

Elements of Stargate can be found in the two Defender spin-offs, Revenge of Defender and Defender 2000. 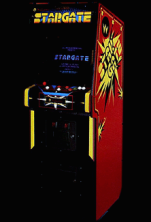 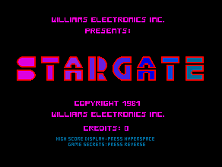 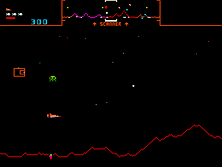 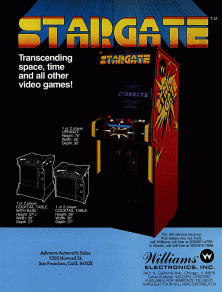 by stargate1984. Comment: "No game will ever deliver the rush like that of Defender STARGATE. Its too bad most of this generation of xboxers and play stationeers will not experience this game. Playing for more than 10 hrs straight on several occassions with one quarter in the early 80's it was intoxicating! Kent C. Houston TX" 2005-06-08 21:18:35Z

Search the following for Stargate