Beat up small men. "Street Fighter" like style of game.

Small graphics and ridiculous aerial leaps against 11 opponents - only had one kick and one punch move.

A game ahead of its time. "Street Fighter" like style of game. Facing generic foes such as Buchu, the fat incompetent karate nerd; Star, sexy girl with ninja stars; Nuncha, fast and furious foe with wooden nuchukus; Chain, another fat fool but with the advantage of a long damaging chain; Sword, who epitomizes karate and swordmanship altogether; Fan, another impressively attractive geisha woman merciless with razor fans; Bleus, the evil last enemy of the game with the skills of a black belt champion and the intelligence of a Mr Miyagi; and many others.

The game's style is exactly like that of the more modern Street Fighter, Mortal Kombat, and American Superheroes. You start as a simple man in a white karate outfit and face each foe one at a time. With the defeat of each enemy you progress to the next and more difficult enemy. In order the names are as follows: Buchu, Star, Nuncha, Pole, Feedle, Chain, Club, Fan, Sword, Tonfun, and Bleus.

Star, Nuncha, Pole, Chain, Club, Fan, and Sword are easy to understand and visualize because they are masters of the weapon of their name. Buchu is the first and fattest of the enemies. Basically, he is the gift to the younger children who had no idea of how to play, but to hit the button as hard and fast as possible. Well, against this foe it would work. Feedle, is not really a single foe, but actually more of a skills test of how well you can fend off multiple foes at one time. Feedle is the simplest to defeat in respects of actual skill to hit them as they come out of the side of the screen. It is the challenge to knock each of the henchman of Feedle away before the next one comes out behind you that is the challenge. The screen changes after Feedle to reveal the next collection of foes. Tonfun, a little more obscure, has wooden extensions connected to his or her( hard to tell) arms that literally put you at a large disadvantage. Each enemy does have a certain weakness that can be exploited in order to defeat them. However, Bleus, the final enemy, does not have an obvious weakness nor one that can be found. It is at this point where a little luck and a tremendous amount of skill takes over.

The overwhelming fun of the game is just playfully fending of the foe and seeing how many times you can hit them in relation to how many times they hit you. Basically, the enjoyment of the game is exactly the same as that with Street Fighter and the others, but Yie Ar Kung Fu was not blessed with the benefits of higher technology. 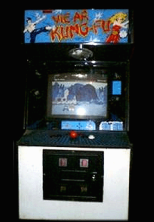 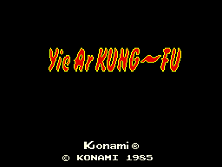 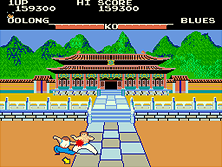 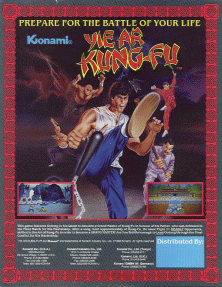 by hessef. Comment: "It was extremely cool in its day--the most ambitious arcade fighter when it was released, but time has not been kind to this game. You and most of your opponents can't block, all hits do the same amount of damage, there's no player vs. player, you can only choose one character--all of these are reasons why this game was obsolete the minute Street Fighter 2 came out. Still, it was extremely cool to spar with Nuncha, Chain and the rest of the gang when I was a kid. Too bad nobody got around to maki" 2001-05-21 00:28:33Z

by Doctor_Phibes. Comment: "If it were not for yie ar kung fu, and karate champ- I think it may have been longer before 2d fighters became as popular. Yie ar Kung fu had a total of 16 different attacks, one for each button times 8 directions... an awesome, fast moving game. One of my favorites as a kid and of all time on top of that!" 2003-01-31 03:33:22Z