Breakout-style game with a futuristic twist.

This game took the Breakout formula to new heights, even giving a story line to the game. Player controlled a ship called a Vaus, and had to get through obstacles aliens placed in your path. Upgrades to the formula were many. There were silver blocks that required two hits of the ball to destroy. Some bricks in the wall released power-up capsules, which could split the ball into three, elongate your ship, award an extra life, or even allow you to catch the ball momentarily and release it from a new location.

Perhaps the best power-up turned the Vaus into a laser ship and the player could blast the bricks that remained in play. The effects of a capsule were identifiable by their distinctive color and letter coding. Additionally, there were some roving obstacles that occasionally when hit would send the ball off at a wildly sharp angle and require the player to adjust rapidly to the change. When all blocks were cleared, you went to the next level. 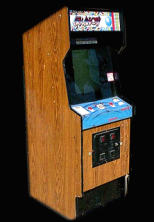 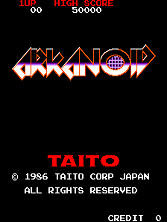 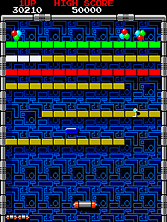 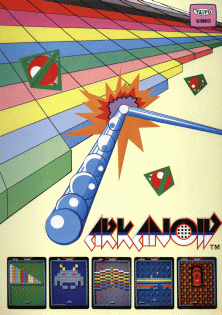 by vics. Comment: "I used to have a copy of this game for the old amstrad computer. Me and my family would sit for hours and hours competing to see who could get the hignest score. Does anyone know where I can get hold of a copy of this game for PC or MAC. I have been hunting but have never been able to get hold of the original. My email is vickyoakton@hotmail.com" 2002-12-02 17:16:29Z

Search the following for Arkanoid