Controls consisted of pistol grips with triggers. Each player controlls a gunfighter on either side of the screen.

Movement was restricted to up or down. Players had a limited amount of ammo they could fire while dodging each other's bullets and hiding behind wagons and cactuses. 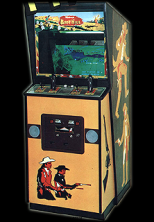 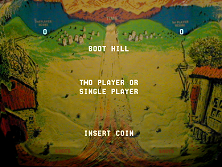 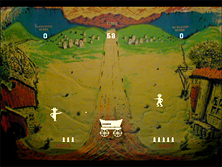 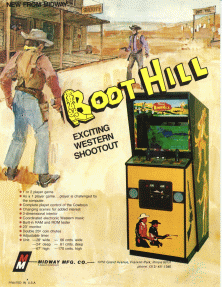 by jintygirl. Comment: "I'm giving it 4 stars, for its time!Now, it would be regarded as incredibly boring, but this was a really early game and it was amazing then! I spent a great many 10p pieces on it at Pontin's Camber Sands in the summer of 1978 and much preferred it to Space Invaders and Asteroids. Seeing the Screen Capture there reminded me how the wagon used to go up the hill and get in the way of my gunfiring (you could play the computer I think (I don't remember playing anyone else!) - I seem to remember a beeped Funeral March when you lost - I'd love to play it again!" 2004-01-31 06:42:34Z

by djewing. Comment: "Great game for it's day..fun fun fun especially when I was 8 yrs old playing this for the first time w/my dad on family vacation. (totally smoked PONG) Yes it's nostalgic, but looking back this game's just plain cool when you take into account what was accomplished with so little technology. Mirrors, vacuum formed background, good sound. Cool funerary march when you shoot your opponent too. turns into a headstone at the top of the screen (Boot Hill). Liked it so much I bought one..." 2007-05-11 22:01:55Z

Search the following for Boot Hill