Cosmic Avenger involves flying a single pilot ship (or so it appears) which is very similar in looks to the ship in Defender. You fly slowly from left to right (the screen scrolls automaticaly) over three diferent terrains.

The first is an alien city stocked to the hilt with gun turrants and missle batteries. Alien flying saucers hover in place, firing single shots. Raised cities on platforms topped with glass domes must be flown over, which can be challenging as movement response is VERY slow.

The second terrain takes you into an under water cave. Prox. mines must be fired at, as the are bobbing up and down directly in your path. Shoot them at close range, you're toast! Alien subs bobbing in place fire forward missles (right to left only). Missiles drop from the open water ceiling.

The third and final terrain appears as a giant green (metal?) plate or road upon which a single tank, moving left to right just a touch slower than the scrolling screen, fires what appears to be its gunless turret straight at you. A new one appears on top of the tank and repeats the sequence. A new tank appears after the destruction of the previous or if you pass the previous.

Then it is back to the alien city and the loop never ends, it just gets harder.

Your only weapons are a forward gun, single shot, and dropping missles, double shot. 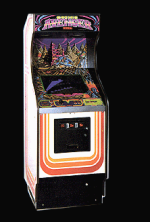 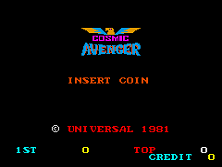 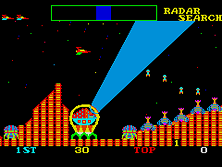 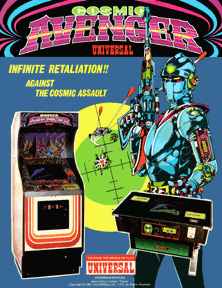 Search the following for Cosmic Avenger