A Donkey Kong clone (not a bootleg) made by Falcon.

Alca, Orca, and Jeutel have all made bootlegs of this game. Also known as Congorilla, and sometimes Donkey Kong Part II. Crazy Kong (クレイジーコング, Kureijī Kongu) is an arcade game developed by Falcon, released in 1981 and similar to Nintendo's Donkey Kong. Although commonly believed to be a bootleg version, it was officially licensed for operation only in Japan when Nintendo couldn't keep up with domestic demand, and is based on different hardware. It retains all the gameplay elements of Donkey Kong, but its graphics were redrawn and re-colorized. Falcon breached their contract by exporting the cabinets overseas, leading Nintendo to revoke the license in January 1982. 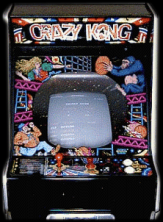 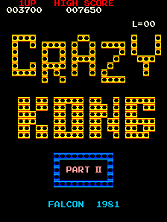 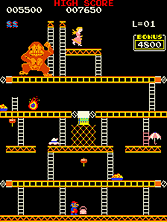 by dasparkybad. Comment: "I have this game in cocktail cabinet form if anyones has another one the same please let me know as mine does not have the original artwork please e-mail dasparkybad@aol.com" 2003-03-10 11:06:59Z

by steerpike. Comment: "I own the original and dedicated cabinet of Crazy Kong made by Zaccaria/Falcon in excellent condition. It's slightly more difficult then Donkey Kong and an absolut classic! If you have any requests e.g. for pictures of the sideart, just write me. contact AT nickrivers.de" 2003-11-06 11:51:19Z

Search the following for Crazy Kong