Finish each course and shoot enemies en route before running out of fuel.

Simple goal of getting to end of each of fifty levels and destroying enemies along the way (actually, some easier levels could be warped over for bonus points). Extra fuel added to your tank at end of each course, with amount based on points scored. Consecutive hits gave scoring multipliers. In addition to standard gun, ships drop bonus weapons/items such as cannons, cruise missiles, electroshields, and nitro boosters. In addition to cars, dangers included turrets, mines, motorcycles, buggies, and at later levels, trees in the middle of the road. You had infinite lives, but fuel would continue to drop as your penalty while waiting for a new car to appear.

Puddles on the road could let you make controlled spins.

Versions of this game appeared for the Sega Genesis, Atari Lynx, and (rumored) the PC. Also found in a Playstation CD collection. 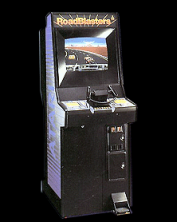 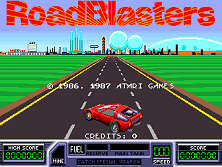 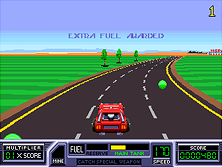 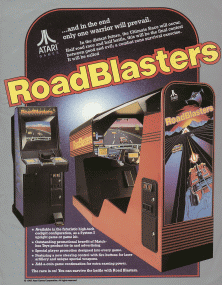 by jpartridge. Comment: "I remembered this game when I found a dead one online for $33.50. After replacing the slapstic chip (bank switch error) I was on the road again having fun. The game has stereo sound, fast action, and is challenging no matter how long you play. I planned on selling it to make money as I do other games, but my wife played it once and insisted I keep it. She is not one to play video games, but she loves this game and I do too. The only thing I don't like about it is that the steering is very sensitive. I would recommend it to anyone." 2003-01-11 22:04:51Z

Search the following for Road Blasters