You play the Legendary Warrior "Rygar" in the side scrolling platform game. The aim is to make it though 27 levels picking up power ups and bonuses along the way.

You'd better have plenty of extra men on the last level as the game does not allow you to continue if you run out.

You'll know that you have an original Rygar board if the word Player2 is spelled "PLAYRE2" in the upper right hand corner of the screen. The typo was corrected in a later release. 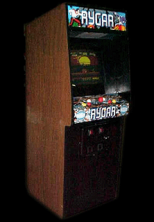 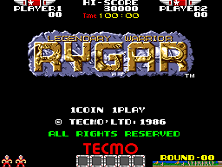 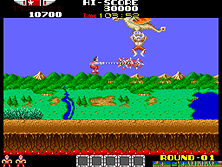 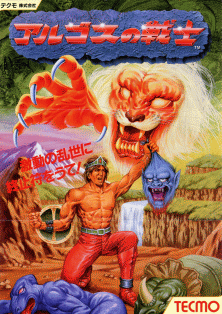 by rygarfan. Comment: "This was, and always will be, my favorite arcade game. Its a very difficult game, and am not even sure what the story is, but it seems to be set in the not too distant future, in a world ruled by monsters and alien creatures. The game itself is pretty difficult and offers lots of challenges. There are an array of different weapons you get along the way (my favorite being the weapon that allows you to shoot far) but each weapon seems to be good for a particular stage. Some weapons are more useful than others, but most are useful all the time. I eager to meet other Rygar fans. I know this was recently released on Playstation 2, but I doubt it can even contend to the supremacy of the Arcade original." 2004-03-17 23:39:38Z

by melster. Comment: "This game was a work of Art. in fact I have yet to see a game that is as good. The action was mind blowing yet beautiful and poetic. ps2 remake was a crap it was not the story, chracters or weapons which made this game great it's dynamics, movements and action was near hypnotic which was it's greatness. PS2 has none of that. I want to this game in what ever form it will be availible. even the whole arcade size. this game should released again in it's original form." 2005-09-23 01:58:30Z

by Yorc. Comment: "This game was there through everything as i was growing up. lmao. we used to play this at lunch hour, 7 of us would race there, the only two that were first played the whole hour! sometimes only one would get a turn!! haha. its the first game i remember looking for jump spots and tricks ( like the million spot you get on 10 or was it eleven? i have it in my home now, but i cant find the million. any one remember it? or a hint site? i google it but no luck. i actually know more of the jump spots than any site i found. best game ever! (era bound statment, i mean only game got me for so long and i concider myself a gamer)." 2009-01-14 00:55:34Z

Search the following for Rygar