As of 2019, the rights to the title is owned by Tatsujin, a company founded in 2017 by former Toaplan member Masahiro Yuge and now-affiliate of Japanese arcade manufacturer exA-Arcadia alongside many other Toaplan IPs. 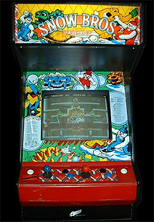 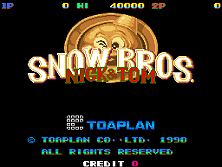 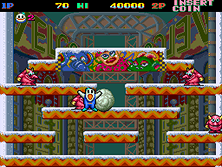 by Letraix. Comment: "Brothers Nick and Tom take on various nasty beasties armed with little more than snowballs. In this action platform outing, the aim is to blast said beasties until they become trapped in a snowball, which can be sent hurtling around the screen eliminating even more beasties. This game is great fun for the first two sections, and then it becomes impossibly difficult - the only negative thing about it really." 2001-01-24 04:39:09Z

Search the following for Snow Bros.