You are risen from the dead to save Zeus' Daughter. Fight your way through five levels collecting power ups to defeat the Evil Magician.

You are brought back from the dead by Zeus to save his Daughter from an Evil Wizard. You go through 5 levels of gameplay. Through each level you can collect 3 power-ups that transform you into a beast with special powers. At the end of each level, after defeating the boss, the Evil Magician steals your power-up and you go to the next level. You change to a different creature each level. You can change to a WereWolf, WereBear, WereDragon, WereTiger and a Golden Werewolf.

This game was also availible for the Sega Genesis Console System. 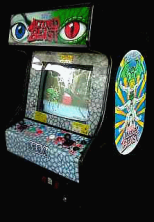 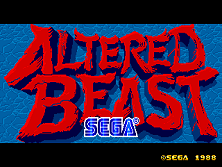 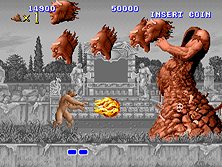 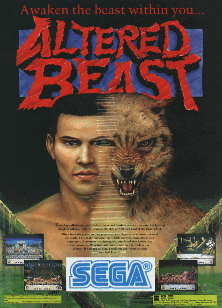 by MetalCrusader. Comment: "I just bought an Altered Beast machine 3 days ago. I think the game rules! Maybe just because I remember playing it at the bowling alley every weekend when I was younger. I looked it up in depth on the internet. People really bash the heck out of it. Though the majority of the people that bash it are little punk kids that think that anything thats not on their x-box is garbage. Check this game out! Its a classic and a very cool game!" 2003-07-26 14:16:45Z

Search the following for Altered Beast