First-person shooter in which the enemy ships are TIE fighters (of Star Wars fame).

Single-player first-person shooter game in color. Fly through space shooting lasers at TIE fighters. Exidy motherships also appear from time to time and shooting them scores big points. At the end there are viper ships from Battlestar Gallatica.

The ships come in colored waves: First red, then green, then blue. Your lasers are formed by four sightlines that extend into space and fire at the convergence. They are very slow moving, so accuracy is of the utmost importance.

The game is not timed, but has a fuel gauge at the bottom. Adding more coins replenishes your fuel.

Star Fire was the first arcade game to maintain a high score list using initials that you entered into the game. 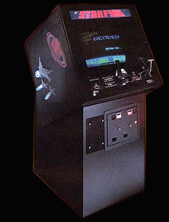 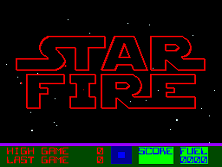 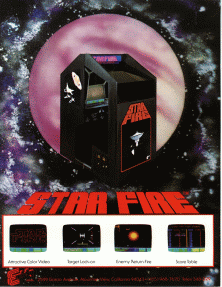 Search the following for Star Fire