A 2- or 4- Player battle frenzy to be the first to destroy the Killer Bagel (actually a Death Star of sorts).

This game is one of the all-time great party games. Unfortunatly, party games don't do well in the arcades. In its cocktail configuration, up to four players would battle it out in a single-screen death-match.

The playfield consists of nothing more than a rectangular border (bounce border), and a spinning, moving Death Star. The object is to kill the death star before the ship inside grows and escapes. You must shoot down a narrow gap in one part of the Death Bagel to destroy the ship. Each time you do this, you score a kill.

Each player is given two rotation buttons (clockwise, counter clock-wise) and a thrust and fire button. You are only allowed to have a single bullet in flight at any one time, but if you shoot again, the new bullet replaces the old (allowing for quickly correcting missed shots). The shots bounce around the screen until they hit either the Bagel or another player. The Bagel is unaffected by any shots that don't go right down the path, but all ships are knocked around when a bullet hits them.

If any ship hits the outside of the Death Star (Bagel) then that ship blows up. 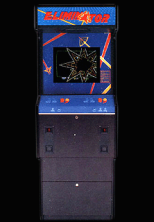 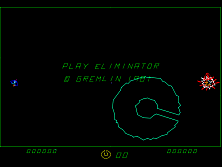 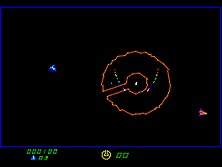 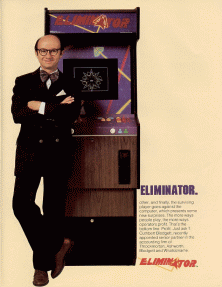 Search the following for Eliminator