A classic shoot 'em up.

A decent shoot 'em up with loads of big weapons and loads of different enemies.. Not a linear vertical scrolly, but left and right scrolling too. Nice music and SFX, it takes a while to get into the game and figure out which powerups help you. Some of the enemies require certain strategies for elimination. 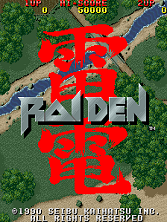 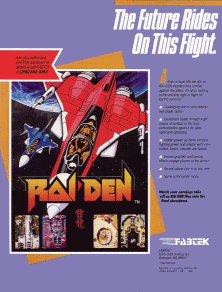 by pastiemike. Comment: "this game is great two player (at same time) unreal fire which changes when you pick up items for hours of fun or huge money maker for operator." 2004-07-02 02:40:24Z

by duffjr. Comment: "Excellent old-school shooter. If you've played any of the newer Raiden games in the series such as Raiden Fighters, you'll definitely be familiar with the game. This is the original with the same level design, but simpler graphics and gameplay. Each level is an additional challenge, requiring a unique strategy and weapon choice, and anyone who manages to reach the spave level, level 6, on one quarter is insane. There is the classic spread gun and laser in this game coupled with homing missiles or more powerful, dumb missiles. In two player mode, players can shoot one another's plane to create scaterred, green firepower. A must for any fan of the late '80s, early '90s shooters." 2005-02-10 21:56:08Z

Search the following for Raiden