Split and destroy "space bubbles" and enemy ships. Ship fires in three directions, and can "Warp" to the top or bottom of the screen. Dock with the Bonus Bug for bonus points.

The object is to destroy these bubble-like shapes by splitting them several times, and then finally destroying the smallest ones. Kinda like Asteroids in that respect.

But you also have to contend with enemy ships that fly around, and some kind of "Space Worm" that will eat a hole in your ship and run you out of it!

You have a "Smart Bomb", which will incur one "hit" on every object on the screen.

You also have the ability to make your ship "Warp" to the top of the screen, and back again, to avoid danger.

Every so often, something called the "Bonus Bug" walks out and you can dock with it to gain bonus points. While docked, your ship cannot fire. 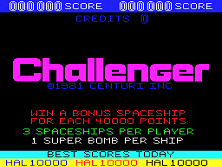 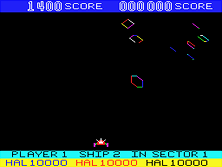 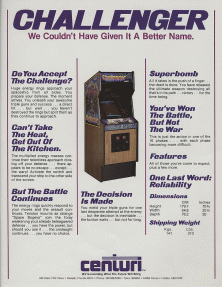 Search the following for Challenger