Updated version of the racing game Rally-X with easier gameplay and the addition of a "lucky" flag.

This updated version of the classic racing game Rally-X has more colorful  graphics, a punchier soundtrack, and some tweaks that make it easier to advance and score, but slightly less fun to play.

As in the original, your goal is to navigate your racer through a series of scrolling mazes while avoiding the pursuing enemy cars.  Now, however, there are fewer enemy cars, and they are moving more slowly than in the original version.

The biggest change in the new version is increased opportunities to rack up bonus points. The radar screen now shows not only the position of your car, the position of the enemy cars, and the location of the flags, but now a flashing dot indicates the location of the special flag (marked SP). It is well worth it to organize your trip around picking up the special flag first, as it doubles the value of every remaining flag, making the last flag worth 2,000 points.

There is also an added fuel bonus. Find the lucky flag (marked L), and the game freezes for a moment, and racks up a bonus for any remaining fuel. Again, it is worth it to find this early on when your fuel tank is fuller.

All of these upgrades are clearly designed to make the gameplay easier especially in the early levels. Unfortunately, the net effect is a dilution of the intensity that the more frantic pace of the original game produced. 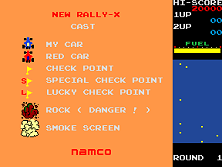 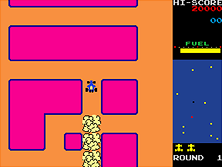 Search the following for New Rally-X