Up to two players can play. Similar to Gauntlet in gameplay. Screen scrolls left or right. Shoot at robots, bad guys, ships, and missiles. Players need a key to progress to the next level, which you have to get by defeating the end boss for the level. Lots of voices in the game with tons of sprites.

The boards used for Quartet and Quartet 2 are the same, with the only difference being 7 of the PROMs used (these determine the game wiring and how many simultanous players can play at once).

The four-player Quartet was only made as a dedicated game while the two-player Quartet 2 was sold only as a conversion kit. Beyond that, the games are exactly the same. 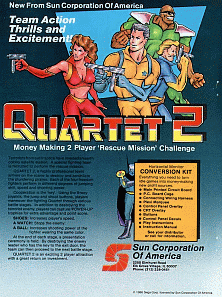 Search the following for Quartet 2