Indiana Jones type game where the hero uses a whip to kill snakes and spiders.

The hero, a Indiana Jones type, used a whip to kill primarily snakes in a "snake pit". The view was an overhead view of the snake pit and the hero.

The controls consisted of two track balls. One ball, controlled the movement of the hero. The other caused a whip to snap in the direction the ball was rolled. The snap would occur a few inches away from the hero so there was no way to hit anthing right next to the hero.

The game would start with the hero in the middle of a large snake pit with various colored snakes coming in from all directions. The hero would snap the whip to kill each snake. The goal was to kill all the snakes to move onto the next snake pit. As play continued, a jumping spider would come out and try to land on the hero. You could only hit the spider when it was on the ground. If you did not get all the snakes in a certain amount of time, more and more spiders would come out eventually overwhelming the hero.

Each successive snake pit was a different shape (i.e., square, hexagon, circle?, rectangle, ...). On higher levels, the standard snake pit shapes would be repeated but with small squares (representing columns) in the pit and then bottomless pits within the middle of the snake pit. The columns just made it more difficult to hit the snakes behind the columns. The bottomless pits would cause the hero to loose a life if the hero fell into the pit.

There were challenge rounds that just had lots and lots of spiders jumping around.

The hero would reach the final snake pit (the gold room or something like that) and the game would be over. The player would get some number of points for each remaining hero left at the end of the game. 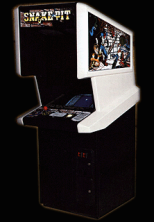 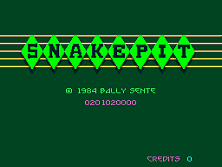 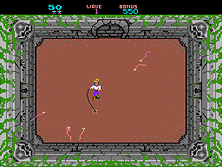 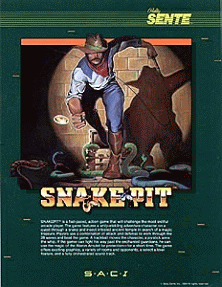 by jjulian. Comment: "This was a great game with lots of intense action. I wish someone would put this out on a cd to buy. You had to be good with the whip to survive especially in the dark where you could just see the snakes eyes as the attacked you." 2003-03-20 16:10:55Z

Search the following for Snake Pit