Choose one of three characters (Barbarian, female barbarian and a dwarf) and go storming through the level killing all in your path. You can jump onto the backs of strange beasts and use their special powers, eg baby dragons who spit fire.. You collect potions which accumulate, which when released can kill all enemies on screen. you can use them as soon as you get them, or save them up to see different magic attacks.. Each of the characters has lost someone close to them at the hands of 'Death Adder', be it mother, brother, father or something and are out for revenge. Sega System 16 game, available in two flavours of pinouts... Early boards are SEGA-56 pin, but later boards are JAMMA. 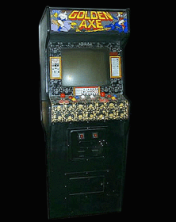 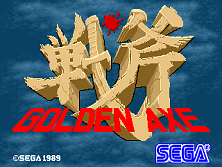 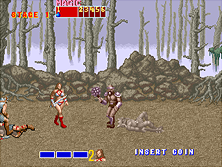 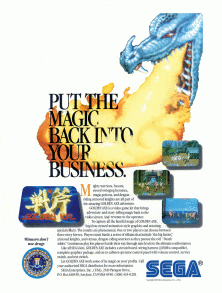 by Letraix. Comment: "As this is the ONLY arcade game I could finish on one coin, I'm naturally quite biased. What made me do it? Obviously the two player aspect added much, but I think the variety in available attack strategies made it interesting, challenging and very playable. Slashing, airborn slashing, special moves, magic, ramming and hitching a ride on a dragon gave it enough variety to be a hit. For it's time, gfx were pretty classy as well." 2001-01-24 04:31:27Z

Search the following for Golden Axe