The first arcade game to run on microprocessor hardware, Gun Fight simulated a duel between two cowboys and could be played by two players or one player against the computer.

Cowboys could move up or down, and the angle of shooting could be adjusted to upper, middle, or lower. The goal of the game was to kill your opponent the most number of times in the one minute allotted with the ammunition supply shown at the bottom of the screen.

As you progress through fights, there are more obstacles to contend with. First cacti, (which can be shot through) appear between the cowboys, then more challenging elements like slowly moving stage coaches block the line of fire. Bullets that richochet off the top and bottom of the screen pong-style can kill too.

When cowboys die, they fall into a heap of pixels, and declare, "Got me!" 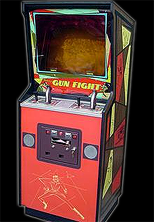 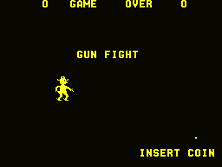 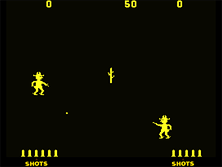 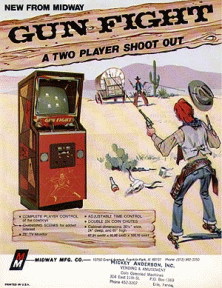 Search the following for Gun Fight