Jungle combat with guns and grenades against an army of evildoers. Lots of powerups and an eight-direction turning joystick/knob to control you fighter. Plus you get to jump into tanks! A classic two player reminiscent of Front Line.

Like Time Soldiers, Warriors allows you to shoot in one direction while running in another.

The only way to continue the game is if you have a partner still alive when you jump back in. Having lots of credits on the game and sacrificing yourself to return with more lives was common insurance against having the game end before you were done taking names and kicking tail.

Red grenades are the best powerup but must be used carefully to avoid killing yourself. Other powerups include red bullets (kill tanks with bullets), long reaching bullets and extra grenades. Oh yeah and TANKS!

Walking is slower in water and tanks need gas or they eventually blow up on you. Tanks won't travel on water and mines are invisible until you're almost on top of them.

Mines and tanks have a habit of chain reactions when they explode causing all hell to break loose. 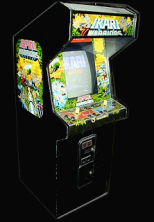 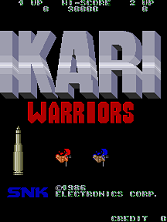 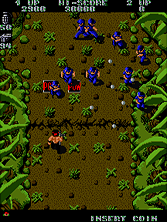 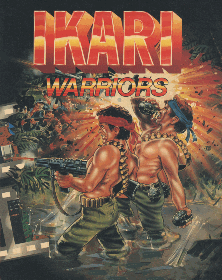 Search the following for Ikari Warriors