An overhead racing game for 1 or 2 players.

A race against 3 opposing cars, one of which may be another live player. You can continue for free as long as you defeat all computer controlled cars. Gates would open periodically, providing shortcuts. Oil slicks and puddles provided obstacles. Pick up wrenches on the course to increase one of four attributes: Speed, Acceleration, Traction, or Helicopter speed (the helicopter dropped you a new car when you crashed.) The game was released in a three-player version as Championship Sprint. 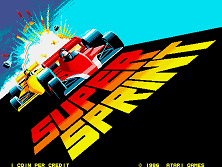 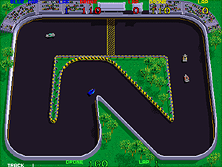 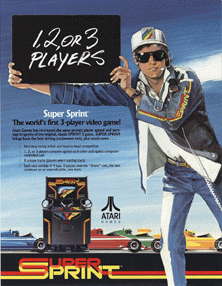 by MrSkip. Comment: "This updated version of the Sprint racecar games from ATARI was extremely fun to play in groups or alone. The smart player would use the yellow car so as to avoid bumping elbows with your rivals -er- friends. If you got too enthusiastic and your hand slipped from the wheel in a sharp right turn, it was not uncommon to give youself an accidental karate chop to the groin! " 2002-12-06 01:45:35Z

Search the following for Super Sprint