Trog is a 1 to 4 player Pacman style game. Each player controls a dinosaur who must move around the island collecting their colored eggs and then making it back home first. There are 51 different levels.

The island of OG is inhabited by 4 dinosaurs named Rex, Bloop, Spike and Gwen. Your job is to help your dinosaur to collect all of his eggs and get home. This task is complicated by several obstacles. The main obstacle is Trog. Trog likes to kill dinosaurs. Other obstacles are pits, wheels, and the water around the edge.

The hardware is based on the Williams Y-Unit which is based around the TMS34010 microprocessor. The game is dipswitch configurable for 1 to 4 players which makes it easy to put this game into any cabinet.

There is an original version of the game software which has been nicknamed BattleTrog. This version did not test well in the arcades but is considered to be more fun to play. Instead of directly controlling the dinosaur with the joystick you are controlling a "hand" which you use to lay down a maze of bones. The dinosaurs are all autonomous and move around the maze. This game requires more skill to play then the "real" Trog. With 4 players it gets very intense. 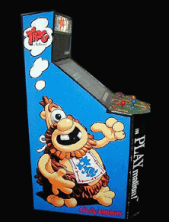 Search the following for Trog