Maze collection game (Pac-man style) based around collecting items(turtle eggs) hidden in Question Mark '?' boxes around the screen and returning them home. A.K.A. "Turtles."

A maze game where the player is a turtle trying to bring baby turtles (called "kidturtles") to their homes while avoiding beetles. A level is complete when all '?' have been checked. To remove creatures, the player had 3 bombs which could be placed strategically around the screen. 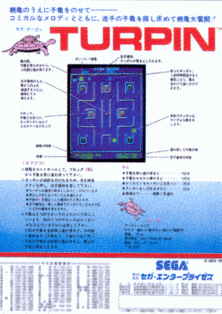 Search the following for Turpin