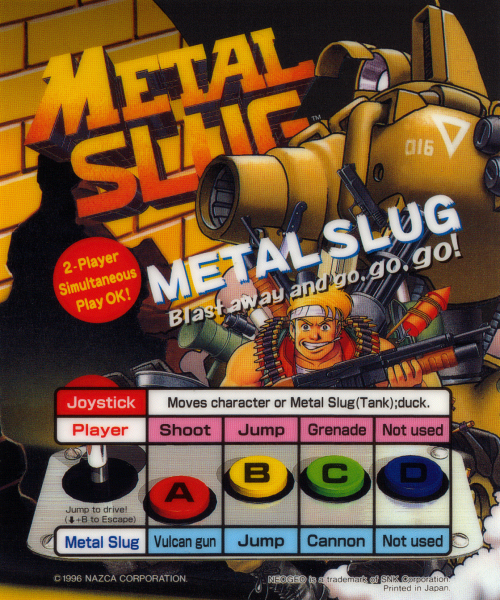 A side-scrolling shooter with lush graphics and comical 2D animations.

The first in the popular Metal Slug series made by SNK for the Neo Geo system.

You control a commando shooting his way through an onslaught of mutant enemies and nightmarish mechanical creations that lead to even stranger and deadlier bosses. The controls are simple: Jumping, shooting, and throwing grenades or other weapons.

Special weapons like flame throwers and machine guns can be picked up along the way or are given out by grateful hostages when you rescue them. You will also need to pick up food to replenish your health.

Also in your arsenal are slugs or tanks that you can hop into and use to do the maximum damage to the unrelenting enemy. And there is the ultimate weapon, the Metal Slug Attack (invoked by pressing shoot and jump simultaneously), which allows you to explode your tank directly into the enemy while ejecting your commando.

As much fun as it is to endlessly fire at waves of approaching enemies, what makes this game particularly engaging are the highly detailed, 2D animations, incredible backdrops, and ever present sense of humor. Characters yell, laugh, run away in fear, and show an incredible variety of emotions and reactions. Sound is equally impressive. 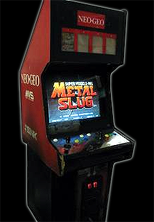 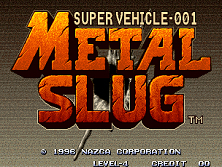 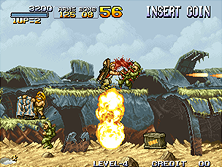 Search the following for Metal Slug