The last arcade game in the R-Type Trilogy by IREM. Rare, energetic, but lacks the skills and inteligence that the former R-Types require.

Although the R9 reappears (simultaneously in 2 player mode), the famous orb is replaced with a power-up icon, and two smaller orbs, which unleash 3 types of laser fire-power. The beam-up has bee replaced with the new orbs homing in on enemies and devestating them.

Made on the M92 pcb rather than the M72, R-Type Leo features only 4 levels with enchaned colours and backdrops, rocking bassy music and simultaneous two player.

Apparently only released for the Japanese market, the pcb is now rare in the rest of the world - and seems to have only been issued in a kit form. 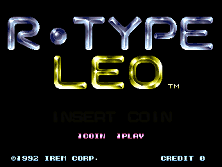 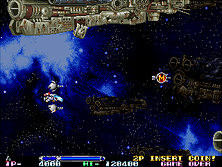 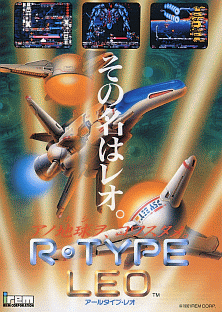 by jimboon2000. Comment: "it's not rtype! yes it is really, but to play it feels so different from the previous 2 games, that it cant be compared to them. the graphics are excellent, the sound superb, and level design sublime. the main issue with gameplay is that when you collect many power ups, you feel invincible, cutting through enemies easily, then BLAM! you get killed, and wow is it tough to continue. almost perfect game still tho!!!!!" 2005-01-07 13:07:19Z

Search the following for R-Type Leo