This game came in 2, 4, and 6 player versions. Runs on similar hardware to the Teenage Mutant Ninja Turtle game also by Konami. 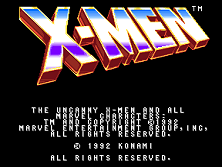 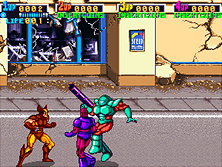 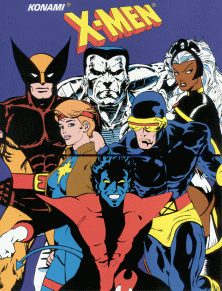 by sparf. Comment: "This game was an excellent reminder of how much fun the unique controller/character tie-in fighting game genre could actually be. I remember fighting my friends for the Wolverine controller and sometimes having to take Nightcrawler instead. This is a truly remarkable game in all respects. But there was a white creature that I think was called the Wendigo that soundly thrashed me, so I never saw Magneto's ugly face in the game. Find it, play it, enjoy it!" 2002-11-18 10:03:48Z

by akuma_slamma. Comment: "This X-men game (god knows there are so many) was to capitolize on the cartoon &quot;Pryde of the x-men&quot; Which was released about the same time as the game. I've gotten as far as &quot;asteroid m&quot; in the game but never completed it. I think this game was the worst of the x-men series, the enemies were freakin' annoying and the special attacks dont really do any damage, it sucked! Wendego was the name of the white sabretooth type creature, by the way. I love the x-men but this game was rubbish! But still it was a pioneer for the x-citing (like the link?) beauties that were to follow. (capcom vs series) Lovely!!!" 2003-03-12 09:13:44Z

by ShnZero. Comment: "Akuma your bugging, out of all the X-men games ever this one was the best!!! Other new ones can never match up to this game including those versus fighting games! They need to make a new X-men game that can add cooperative multiplayer action like this one! This game OWNS!!!" 2003-07-01 18:40:56Z

by FuzzyLogic. Comment: "I am fortunate enough to have the 6 player acrade game in my basement, The game is solid, dependable, mayhem-fun. The special powers are in fact pretty tough, but as they cost life points to use were mainly a way of sucking more quarters out of little kids in the arcade. An the white monster's name is, in fact, Wendigo, although my 6 year old daughter calls him &quot;Wendicow&quot; when we play (she also refers to Juggernaught as &quot;Juggernugget&quot; - makes Jugs a bit less intimidating)." 2003-10-12 10:28:46Z

by mikiek. Comment: "Hey guys, This is a great game! My mates &amp; I used to play this ( &amp; Sunset Riders) in our local Arcade when in our early 20s. I always thought it better than the other scrolling fighters and the sounds were OTT and funky. I sold of many of my coin-ops when my first little girl was born but X-men and Donkey Kong are still with me at 34 years old.. memories!" 2004-09-06 20:22:12Z

by wsachleben. Comment: " I am in the process of purchasing this game. Can anyone give me a range of what it would be worth? I have looked it over and it is in excellent condition (Everything original and works). I am wondering if kids like to play it or just the &quot;Big Kids&quot;? please email me at wsachleben@aol.com with your response. Thank you" 2004-10-22 15:57:52Z

by mstanggt91. Comment: "I absolutely love this game. I used to go play it like everyday at the arcade until they took it away. Now I neeeed 1! If anyone can tell me where to get it/if anyone has it please let me know. (especially the 6 player version) niftyjack88@yahoo.com" 2005-03-27 23:50:44Z

Search the following for X-Men