The Brothers Grimm go 3-d. Pac-man style game in which you move Bentley Bear through a series of dazzling 3-d landscapes, collecting gems and avoiding balls, trees, and other bad guys.

You are Bentley, a snuggly bear, trapped in the witch Berthilda's castle.  Your mission is to move through a series of increasingly elaborate castle landscapes, collecting gems as you go. Unfortunately Berthilda's henchmen, in the form of ghosts, trees, skeletons, one-eyed squiggly creatures, and the like, are also after the same gems, and, of course, you.

The game controller is a glowing trakball, which can take practice to get the knack of, but is well-suited for navigating the complex architecture of the levels.  With their 3-d isometric views, landscapes are reminiscent of Q-bert, and much of the charm of the game comes from exploring their elevators, ramps, and hidden back sections.  The landscapes are grouped into "levels" and after completing a landscape Bentley travels on roads connecting the landscapes and levels.

There are many warps that take you to higher levels. Pots of honey award extra points, but are guarded by an angry swarm of bees that descends with more urgency the longer you spend on a landscape.  Grabbing the witch's hat makes Bentley invincible to the evildoers, and enables him to kill Berthilda when she makes her sporadic appearances.

A landscape is complete when all the gems are collected, and you get a bonus if Bentley collects the last gem. Bentley is transported to the next landscape accompanied by a beeping rendition of Tchaikovsky's Nutcracker Suite.

This is one of the few games to actually have an end, and a clever touch is that the high scorer's initials are incorporated in the design of the first level. 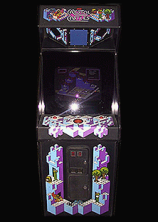 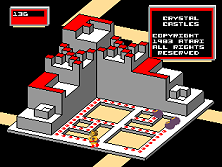 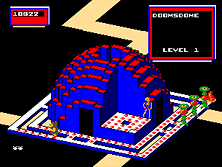 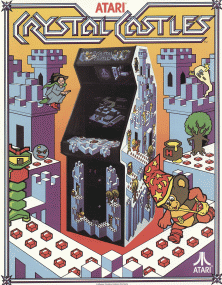 by rsvore. Comment: "This is a great classic game. I bought this in November for $150 and it works great. Replaced the track ball bearings which inproved game play dramatically. My three year old girl can make it to the third maze all by herself." 2004-01-28 12:14:30Z

Search the following for Crystal Castles