Black-and-white space shooter for one or two players.

Move your ship at the bottom of the screen left and right and shoot at the approaching comets, meteors and UFOs. Some shoot at you, others do not.

Instead of having multiple lives, you have a limited fuel tank. When you are hit by the enemy, the game freezes and your fuel tank is depleted. Docking with the mothership will replenish your fuel supply. 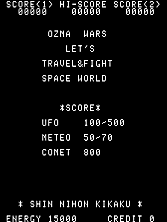 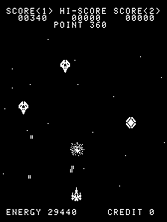 Search the following for Ozma Wars