Black-and-white head-to-head football for two or four players. First arcade game to use a trackball as the controller.

An early game for two or four players. Players stand across a table and each controls their players with a trackball and a button to select plays.

In the two-player version, one player is offense, the other defense. In the four-player, one person plays quarterback, the other receiver when on offense. Football players on screen are represented by x's and o's. 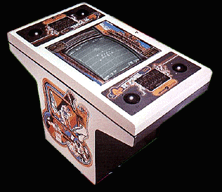 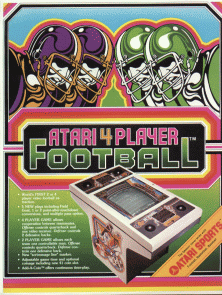 by jonny_street. Comment: "After playing this, it felt like you really had a 400 yd passing game. We would move the cabinet further from the wall, because by half time you arm was getting ready to fall off. You either used your other hand or stood to the side of the game so your right-hand &amp; arm were moving in a different direction. It only offered 4 different plays on both offense &amp; defense and the graphics were simple &quot;X's &amp; O's&quot;, but there was nothing else like it!!! Madden just recently retired and the only other football games were electric, with vibrating plastic players that went around in circles. This game not only let you control the action, you had to physically make it happen. There have been no other games, except the 4-man that will challenge your physical stamina as Atari Football. When the 4-man unit came out, this unit was given to me and became the 1st Video Game in my collection, which is still operating in my Rec-Rm today!!" 2003-04-20 02:38:04Z

by cyclone. Comment: "I just purchased one on e-bay and really forgot how much I enjoyed this game. It is a workout and something my son enjoys now too. I am in need of another button for the play selection but can't seem to find one. I would love some help. Thanks" 2006-01-23 15:54:06Z

Search the following for Atari Football