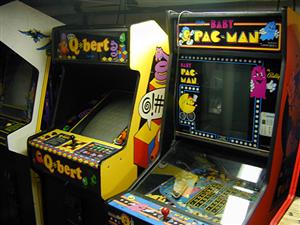 Went down to finally deal with this thing. All exposed metal surfaces are slightly hot, so I replaced the multilated power cord with a 3-prong power cord. Power on. Shock is gone. Hear startup tune, quietly. Front volume is all the way up, volume on board is extremely flaky, this will have to be replaced. Right now just set to super loud.

Screen is purple. Red/Blue drives on vidiot board affect color. Pressing Sound Test gives sound, pressing video test does nothing. The LED next to the "power supply" part of the vidot blinks twice then pauses and blinks once. Playfield lights up. Self test on door does nothing. S33 (what is this) does nothing.

I think that the flashes indicate that the ROM at U10 is bad, I'm going to solder in new sockets from U9-U12 unless I hear otherwise, and then go ahead and get new ROMs if that doesn't do anything.

Okay, I lied. I desoldered and resoldered sockets U12-U9, huge pain, took me like 3 hours. That brings the self test to 9 flashes. The 10th would be VRAM, since I'm missing the chip at U19, that makes sense. I have the last eleven 2118 chips that B.G. Micro has in stock on their way.

Now, when I press video test on the board twice, the screen changes from purple to various garbage, but organized garbage. Damned exciting. The front test doesn't do anything yet, probably because the last thing it does after the last test is initialize the communications between the boards and go into normal operation.

Received the rubbers kit from Centsible Amusements (they seem defunct). Turns out the key that came with the machine that is supposed to open the playfield doesn't open the playfield, and it's almost impossbile to get to the back of the lock to disassemble. Still waiting on the DRAM. 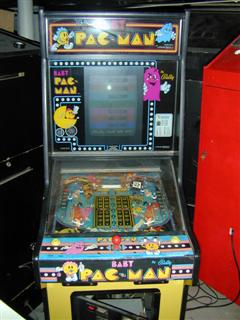 Got the RAM from B.G. Micro. Swapped out all 7 pieces and added the 8th. Same exact thing. Time to resolder new sockets for the RAM.

Well, I resoldered the one socket (U26) it's a total mess, someone melted the hell out of it. I reconstructed the circuit by soldering pins to the chip next to it as needed. Now when I start it up I still get the 9 flashes, but now when I double-press the video test, I get color bars, only... The top of the words are cut off, and it's clear that all the driver trim pots will need to be replaced, as they are just like the voulme pot.

Testing leads shows me that pin 4 (RAS) of socket U26 has no connection through. Jumpering that (that makes 5 jumpers, what a disaster) and the board now completes 10 flashes. Two clicks on video test brings up perfect color bars (except for the jitter from the trim pots).

For some reason it's not talking to the MPU. The MPU light glows solid green.

Drilled the playfield lock, installed the rubber kit. Realized that I'm missing the left spinner at the entrance to the fruits. Sucks. Anyone have one?

Tried to troubleshoot the MPU, didn't get anywhere. Just have the steady LED. Board is jumpered correctly. Installed new playfield and coin door locks.

Okay, so after a few more attempts, I got a 6800 and a 6821. Replaced them. Same thing. Rechecked jumpers. There's a stray jumper in there. Whoops, didn't catch that before. Power up, no kidding, flicker flash + 2 more. 5101 is dead. Grab the one out of Defender cocktail. All but the last flash (I'm on a test rig without the 43V, so that makes sense). Put it in the game, wham, the thing comes up. No kidding.

But, none of the solenoids work except the flippers. The solenoid bus fuse is blown, and I can't believe that I don't have a 1A fuse around. So I have to wait until tomorrow. I also want to replace the 5101 with a DS1220 and I'll whip up a little custom dealy to change pin sizes. Then I can remove the batteries and have 10 years of backup without them.

Replaced the fuse. It all works. Waxed the playfield, cleaned the plastics. It's amazing how much harder the game is when the playfield is clean and waxed. Replace the rusted out feet with the plastic-bottomed ones and leveled the game. Replaced the bulb behind the marquee. Very nice. 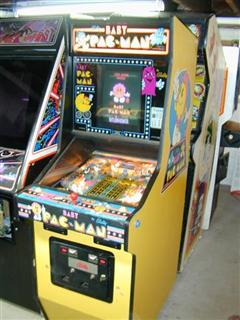 Things Remaining to do:

You can contact me through this minimalist contact form if you wish.
kk's entire collection
Copyright ©1994-2022 Minimalist, all rights reserved.