Moon Cresta would have been a rather unmemorable game were it not for the docking sequences that punctuate the blasting action. Unlike most shoot-em-ups, that have a number of seperate lives, Moon Cresta had three stages of the one ship. The first stage could only fire a single shot, but after 2 waves of Cold Eyes, and 2 waves of Super Flies, the first stage can dock with the second stage to give greater firepower. After waves of Four-Ds and meteors, the third stage can be docked with, to give the player a maximum of five shots at one time. All three docked stages were commonly called the "Christmas Tree". Despite the increase in firepower, the three stage Moon Cresta ship is cumbersome, and makes avoiding aliens and bullets a bit difficult. Often found in cocktail tabletop form. 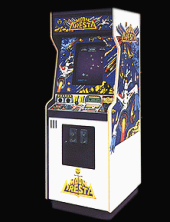 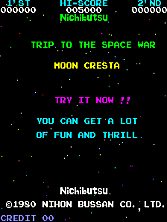 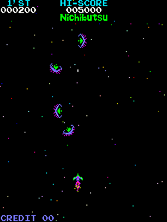 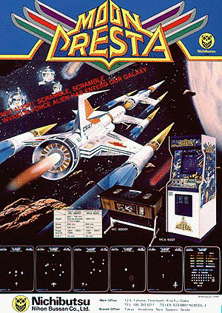 by MoonCresta. Comment: "I recently purchased a cocktail version of Moon Cresta. I remember playing this game as a kid and I really enjoyed it. I like the graphics and the audio. One question I have about the game play relates to a generally square shaped graphic that appears on the screen during the docking sequence. Can anybody tell me what this graphic is for?" 2007-04-13 11:52:02Z

Search the following for Moon Cresta