Dig holes to trap aliens. Fill holes back up to kill them.

Aliens looked like walking tomatoes - frustrating but fun - whack aliens over the head with your shovel. There were 3 kinds of aliens, the regular ones that only had to drop one level to die, Bosses that had to drop two levels, and Dons that had to drop three levels. Or drop aliens on top of each other to kill them all. Game was timed (oxygen level bargraph), running low on oxygen made players face turn red, running out of oxygen killed him. Failure to kill a Boss would transform him into a Don. 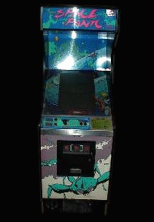 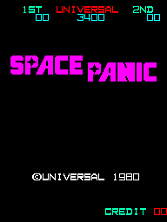 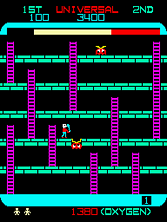 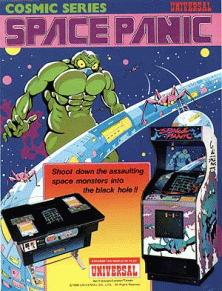 by ray1701. Comment: "i found this game very addictive because i really liked the alien monsters and how you could destroy them .I allways seem to remember the sound effects of this game.It's quite a unique game." 2002-12-13 12:19:31Z

by GravMaster. Comment: "Excellent strategy game. Was very cool when you could drop 5 white monsters at once. Random moves of monsters was a bit frustrating at upper levels, and added too much luck in to the game." 2003-01-26 02:59:22Z

Search the following for Space Panic