Choose from the real NBA teams and NBA players (as of 1993) and go two-on-two against up to 3 other human players or computer-controlled players in a parody of NBA basketball. Dunks (jams) are the rule not the exception. Make three shots in a row without letting anyone else score and you'll be "on fire" - the net will burn when you make a shot and you can make almsot any shot. The fire goes out when the other team scores. Many secrets and powerups in the game and can be activated by doping button/joystick combos at the "Tonight's Matchup" screen. These include Powerup Defense, Big Head mode, and the now-famous Tank Game. Buttons are Shoot/Block, Pass/Steal, and Turbo. 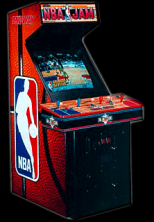 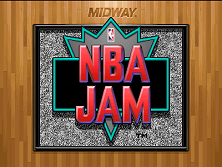 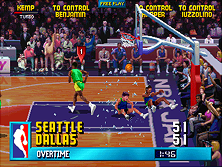 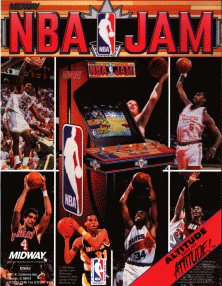 by shep_616. Comment: "NBA JAM, probably the greatest two-on-two basketball game of all time, has paved the way for the newest generation of no rules, in your face basketball games like NBA Street. The concept of the game was very original and added many hours of excitement. The graphics on the game were above par for 1993. The play-by-play was great. The best thing about NBA JAM however, was its controls which would alow a player to press a turbo button for extra speed and all of the rim-shattering, "Is it the shoes?" dunks! The" 2001-07-29 13:22:16Z

Search the following for NBA Jam